Los Angeles-based artist Shana Lutker investigates the psychological associations between objects through sculptural and photographic means. In Lutker’s diverse body of work, objecthood is scrutinized in relation to space and subjectivity. Shana Lutker’s debut New York solo exhibition, Combined Faulty Acts, consists of four discrete bodies of work, each challenging symbolic representations of a Republic and interrogating the consequences of a politicized, reactionary Polis in a democratic society. Deeply influenced by Sigmund Freud’s theories of dream analysis, specifically in his seminal texts The Interpretation of Dreams(1899) and Psychopathology of Everyday Life(1901), Combined Faulty Acts furthers Lutker’s examination of the advancement and devolution of civilizations within the realm of visual culture.

Combined Faulty Acts responds to the consequences, on both micro and macrocosmic levels, of repetitive actions with potentially disastrous repercussions. Freud’s examination of an individual’s transition from forgetting to remembering, through the process of disabling “screen memories,” is mirrored in the exhibition. Lutker’s four artistic devices are an attempt to enable the viewer’s consciousness to (re)emerge and take full accountability of the faulty actions and disturbances of everyday life. In this exhibition, we may also attempt to (re)cognize America’s compromised position in the world as a result of procedural errors and unethical governance. Combined Faulty Acts is an allegorical case study that poses significant questions to what Freud describes in The Future of an Illusion(1927), as “[a] culture which leaves unsatisfied and drives to rebelliousness so large a number of its members neither has a prospect of continued existence nor deserves it.” 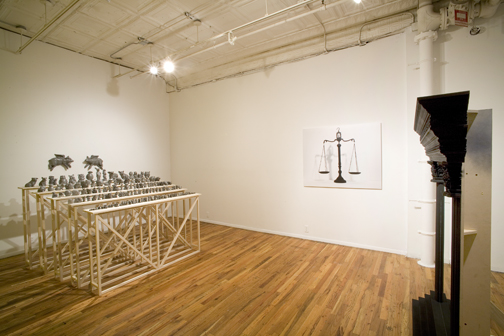 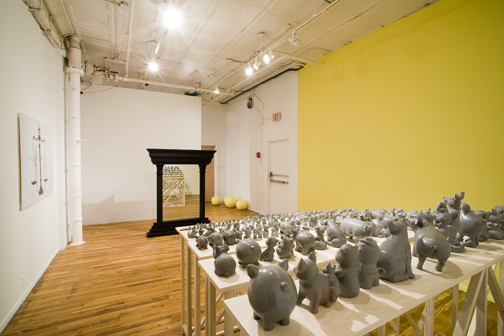