Recent years have seen a sharp resurgence of social movements, within which artists and cultural workers are playing leading roles. Decolonization, not only of the mind, but of land, institutions and social relationships, has emerged as a sweeping imperative across contemporary political struggles.

Organized by the collective MTL+ at the invitation of Common Practice New York, Decolonize This Place will convert Artists Space Books & Talks into a shared resource for art, research and organizing.

At the core of its process is a weekly program of public events, with collaborators from across the five boroughs anchoring assemblies, trainings, skillshares, readings, screenings, meals, and healing sessions. Confirmed participants include

with further collaborators added through the duration of the project.

The program of outward- and inward-facing events will center five lines of political inquiry, namely Indigenous Struggle, Black Liberation, Free Palestine, Global Wage Workers, and De-Gentrification. Different communities will be in dialogue through the space, establishing ties between groups that tend to converge around single issues. Moving beyond politics that rely upon loose definitions of commonality, Decolonize This Place seeks instead to mobilize complex differences to decenter whiteness and repatriate land.

Decolonize This Place will prioritize the presence and work of people of color and will be inclusive of queer, immigrant, and disabled participants—challenging the white supremacy that continues to characterize the economies and institutions of art.

The project will be grounded in the in-house production of posters, banners, t-shirts and other artworks, with a print station providing the means to make zines and publications. Artworks produced will be displayed in the gallery and strategically used in actions across New York, collapsing a feedback loop between exhibition and demonstration. Through this, 55 Walker Street will be coded as a site of continuous social and aesthetic production that feeds directly into movements across the city. A kitchen and greenhouse will root the project in a politics based on abundance, in an attempt to depart from an economic schema that emphasizes scarcity.

Just as Artists Space itself is transformed into a self-regulated commons, Decolonize This Place will “strike art” to “liberate art from itself”—in the words of MTL+ member Nitasha Dhillon: “not to end art, but to unleash its powers of direct action and radical imagination.” The fluid intersection between grassroots organizing and creative activism is key to this process. When communities make artworks, and artists become organizers, usual hierarchies of artistic production fall apart.

Through its three-month duration, Decolonize This Place will question how the alternative arts organization, pressured to justify ever-escalating real estate values, can re-interpret its traditional function as holdout within an art world increasingly quarried for ultra-luxury assets. At a time when so many neighborhoods see art crudely utilized to drive gentrification, what further models of community engagement can nonprofit institutions devise?

A website with further information, documentation and a calendar of daily activities can be found at www.decolonizethisplace.org.

Nitasha Dhillon and Amin Husain are founding members of MTL, a collective that combines research, aesthetics and organizing. MTL is a founder of Tidal: Occupy Theory, Occupy Strategy, and of Global Ultra Luxury Faction (G.U.L.F.), Direct Action Front for Palestine, Strike Debt, Rolling Jubilee and Decolonial Cultural Front. Currently, MTL is working on a film on Palestine titled On This Land (onthislandfilm.wordpress.com).

Yates McKee is an art historian whose work has appeared in venues including October, Grey Room, Oxford Art Journal, e-flux Journal, Texte zur Kunst, South Atlantic Quarterly, and The Nation. He is the author of Strike Art: Contemporary Art and the Post-Occupy Condition (Verso, 2016).

Andrew Ross is a social activist and NYU professor. He has authored many books, has written for The New York Times, The Guardian, The Nation, Newsweek, and Artforum, and was a founding member of Occupy Student Debt Campaign, Gulf Labor Coalition, Strike Debt, and Global Ultra Luxury Faction (G.U.L.F.).

Kyle Goen is multidisciplinary artist and founding member of AKA Exit, an art collective that combines research and aesthetics in direct actions. Kyle is a core member of Direct Action Front for Palestine and Decolonial Cultural Front, the formation that led the action against Brooklyn Museum in May 2016, and was the precursor to Decolonize This Place. Kyle is also an active member of Global Ultra Luxury Faction (G.U.L.F.). 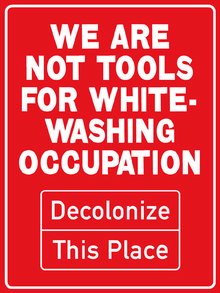 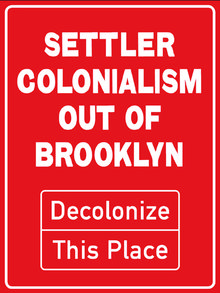 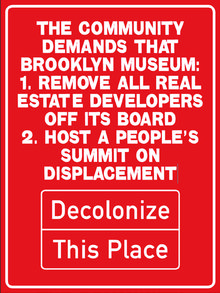 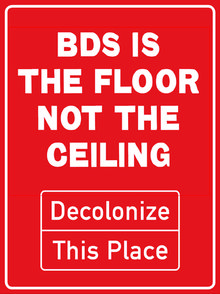 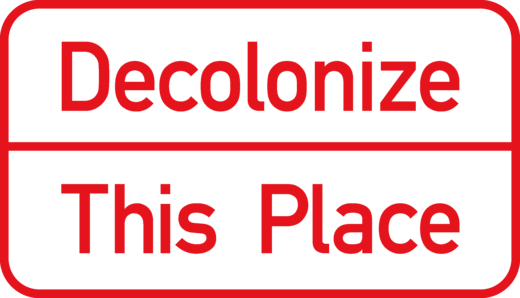 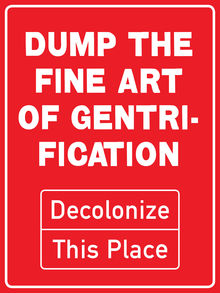