“Identity” is an exhibition that charts the emergence and proliferation of graphic identity since the turn of the twentieth century, with particular reference to contemporary art institutions – museums, galleries, and so-called alternative spaces.

The period since the 1960s in particular has seen significant shifts in the perceived role of contemporary art in society, as well as the impact organizations displaying art have on economic and political infrastructures (and vice versa). “Identity” attempts to animate the typically fraught relationship between cultural and corporate spheres, as contemporary art institutions become increasingly preoccupied with their own image. How do changes in the graphic identities of art institutions over the last five decades reflect the shifting landscape of institutional policy and strategy? How does the conception of “Identity” – through an organization’s use of graphic design, its marketing and branding – function to mediate between audience, artwork, and institution?

Initiated by Stefan Kalmár and Richard Birkett of Artists Space, “Identity”has been developed over a two-year period by Dexter Sinister – the working name of designers, publishers and writers Stuart Bailey and David Reinfurt – with research assistance from Robert Snowden. The resulting exhibition centers on a three-part projection that functions as part informational film, part minimalist cartoon. This audio-visual essay uses three case studies – London’s Tate, the Museum of Modern Art, New York, and the Centre Georges Pompidou in Paris – as coordinates from which to plot a broader landscape. Looking at the evolution of their ‘brands’ over the last fifty years, the film projects how art organizations negotiate their positions on a spectrum of ideology and economy.


This exhibition runs concurrently with The Serving Library.  For more information click here.

Identity is an Artists Space commission, and has been co-produced with Tramway, Glasgow. The project will be exhibited at Tramway in Fall 2012.

This project is supported by The Graham Foundation for Advanced Studies in the Fine Arts, The New York State Council on the Arts, a State Agency, public funds from the New York City Department of Cultural Affairs, in partnership with the City Council, and The Friends of Artists Space 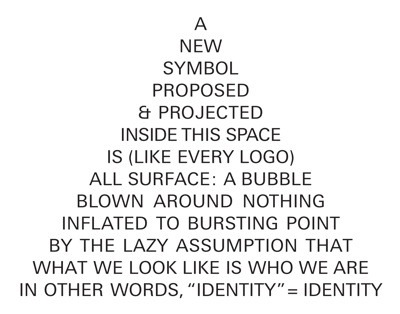 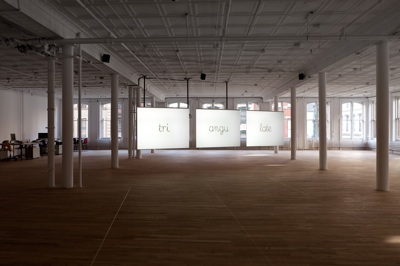 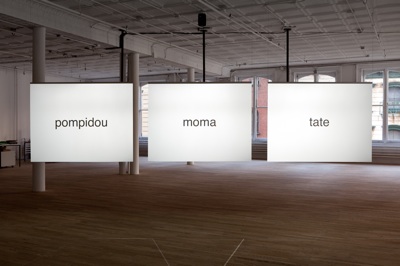