Since its inception in 1968, the Whitney Independent Study Program has evolved from a small experimental project challenging established thinking about pedagogy and art to become a world-renowned model for an alternative approach to the education and professional development of young artists, curators, and art and cultural historians.

Ron Clark, ISP director, has remarked that the program recognizes “that there are always social and political stakes involved in cultural practice. Art and culture are never neutral or innocent. They are always shaped or determined in some way by social interests. This conception contradicts the central principle of conventional mainstream aesthetics that art is disinterested, autonomous, and separate from the social world."

In keeping with these principles, the artists of this year’s studio program are committed to socially engaged, critical art practices. The works presented in Public Event critique the ideological effects of cultural representation using a variety of means and methods, from installation and sculpture to video and painting. These projects find urgency in questioning a range of discourses, from gun ownership, big data, and education to political incarceration, ecology, and postcolonialism.

For a full schedule of events, please visit: www.whitney.org/Research/ISP 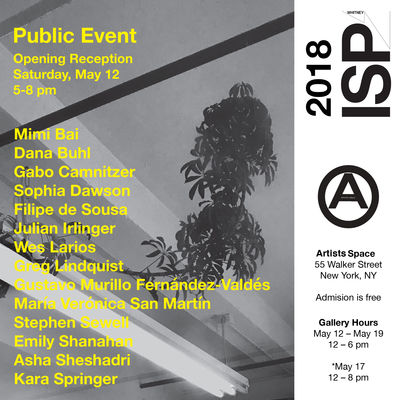 A note on access:
Artists Space is accessible via elevator from street level, welcomes assistance dogs, and has wheelchair accessible non-gender-segregated toilet facilities. For access inquiries please contact Artists Space at info@artistsspace.org or
212 226 3970.

Mimi Bai was born in Xi’an, China and is currently based in Brooklyn, NY. Her work encompasses an individual practice focused on objects, text, and drawing and a collaborative practice that takes the form of installations and sets. She has presented individual and collaborative work at MoMA PS1 (Warm Up 2016) and the Whitney Museum of American Art. Bai is a graduate of Alfred University (MFA, Sculpture) and Wesleyan University (BA, Sociology).

Dana Buhl is an internationally exhibited visual artist based in New York City working with images and archives to explore the conditions of photography. She holds a BFA in Photography from Arizona State University and received an MFA in Visual Arts from Columbia University in 2017.

Sophia Dawson is a Brooklyn-based visual artist who has dedicated her life’s work to exposing the stories and experiences of individuals who are striving to overcome the injustices they face both individually and collectively. She holds a BFA in fine arts from the School of Visual Arts and an MA in Visual Arts Administration from New York University. Her work has recently been exhibited in Rush Arts Gallery and the Bronx Museum for the Arts. Some of the subjects of her work include mothers who have lost their children to police brutality both past and present, the Central Park 5, and political prisoners from the Black Liberation movement that are still incarcerated within the United States.

Filipe de Sousa is an interdisciplinary artist and filmmaker living and working in New York City. Originally from South Florida, he received his BFA from the University of West Florida and an MFA from Tyler School of Art in Philadelphia. His work is concerned with questions of history, public space, and the possibilities of social change and politics within the neoliberal epoch. He has shown at a few places nationally.

Greg Lindquist is a New York-based artist and writer. His work has been exhibited at numerous galleries, institutions, and museums, including the Brooklyn Academy of Music, University of Arizona Museum of Art, Weatherspoon Art Museum, and North Carolina Museum of Art. He was awarded the Marie Walsh Sharpe Space Program, Milton and Sally Avery Foundation grant, Pollock-Krasner Foundation grant, and ArtOMI residency. Lindquist completed a dual master's degree in fine art and art history from Pratt Institute in 2008.

Gustavo Murillo Fernández-Valdés works with photography, video and animation. He holds a BA in Humanities with an art history concentration from Pompeu Fabra University, Barcelona and an MFA in Photography and Video from the School of Visual Arts, New York. Murillo Fernández-Valdés is a recipient of “La Caixa” Scholarship, and was selected winner of the Magenta Foundation Flash Forward Emerging Photographers award in 2012 and 2013. In 2016, he published Olympics at Home (Marshgate Press), which was selected for the SCAN Tarragona International Photography Festival. He has exhibited his work in New York and London.

María Verónica San Martín is a Chilean born, Brooklyn-based artist currently working in printmaking, artists’ books, installation and performance. Represented by Booklyn Inc., she has had exhibitions at The Museum of Memory and Human Rights, Santiago, Chile; BRIC Arts Media, Brooklyn, NY; The Cantor Art Center, Stanford University, CA; The Bayerische Staatsbibliothek, Munich, Germany, and, is preparing a solo show for The National Archive in Santiago in October, 2018. Her work can be found in the collections of The Pompidou Centre, The New York Public Library, The Walker Museum, among others.

Stephen Sewell is an artist, educator, and labor rights activist. He received an MFA from the University of Washington and is an alum of the Mountain School of Arts and the Art & Law Program. As a member of the Art Handler's Alliance of New York (AHA-NY) he co-curated the exhibition Just Cause: Bad Faith - Art Workers' Activism and Organizing in New York and Beyond at Interference Archive (2015).

Emily Shanahan received her MFA from the California Institute of the Arts in 2013. Her work has been exhibited in Norway, Germany, Singapore, Canada, and the United States. Exhibitions include Soft Skills at The James Gallery, CUNY Graduate Center, and Notes on how to be a human at The Banff Centre, Alberta, Canada. Emily was an artist-in-residence at the Vermont Studio Center in 2010, and a participant in the New Museum Seminars in 2016. Her artist book The Tick vs. the Hum was published by Golden Spike Press in 2015. Originally from Montreal, she now lives and works in Brooklyn, NY.

Asha Sheshadri works in video, sound and writing. Her practice presents issues of identity, history and postcolonial representation through narratives sequenced from cinematic, photographic and textual archives. She lives in New York and received her MFA from the University of Pennsylvania School of Design in 2017.

Kara Springer is a visual artist and industrial designer whose interdisciplinary practice explores precarity and brokenness in systems of structural support through engagement with architecture, urban infrastructure, and systems of institutional and political power. Originally from the Caribbean, she has lived, worked, and studied in Toronto, Paris, Philadelphia, and New York. 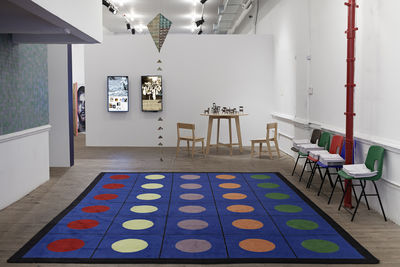 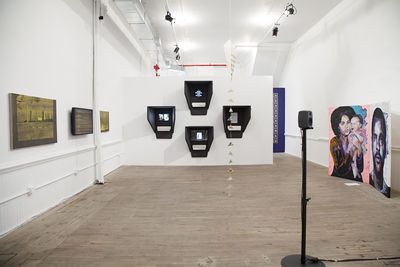 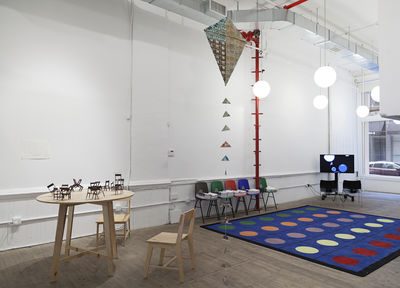 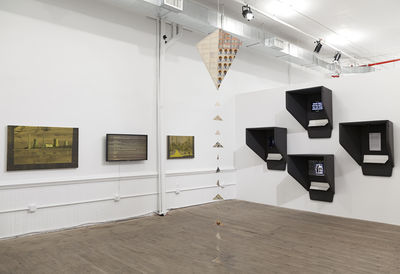 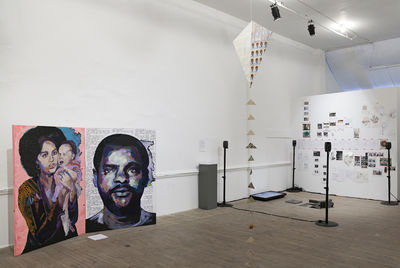 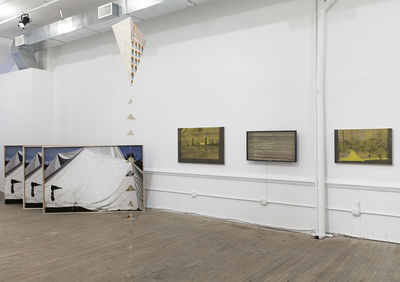 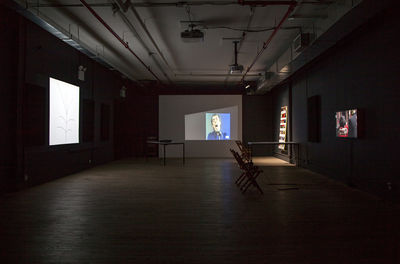 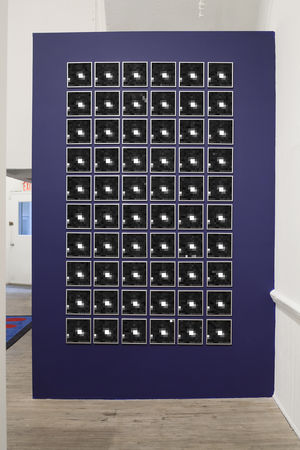