The concept of a pristine and virgin continent has infected the colonized mind since the first Indigenous american villages were decimated by european immigrants escaping centuries of trauma, shame, and patriarchal violence. Last year, the world witnessed thousands of Indigenous peoples embodying ceremonious acts of sovereignty from corruptive motivations driven by the descendants of these european immigrants. Through political dissension, social demonstration, and occupation employed as a form of reclamation, Indigenous communities came together to develop new pathways aimed at healing from generations of trauma, erasure, and cultural and environmental genocide.

At the very foundation of contemporary theory, poetry has always played a crucial role in the way human beings have interacted with the world around them, the cosmos, and with other human beings. Through poetry, storytelling, and oral traditions, Indigenous peoples have helped give shape to the critical components of survivability throughout the americas. LAND MASS will highlight the voices of three writers—Natalie Diaz, Demian DinéYazhi´, and Sonia Guiñansaca—who work closely with their communities to sustain the urgency of their voices and through poetry offer spaces for healing and political discourse.

By entering this space, you are acknowledging that you are on colonized Lenape lands, and commit to surrendering your privilege, time, and unease to the labor and love embedded into their poetry.


LAND MASS is organized with Demian DinéYazhi´ in conjunction with the exhibition Unholding (November 19, 2017 – January 21, 2018)

Natalie Diaz was born and raised in the Fort Mojave Indian Village in Needles, California, on the banks of the Colorado River. She is Mojave and an enrolled member of the Gila River Indian Tribe. Her first poetry collection, When My Brother Was an Aztec , was published by Copper Canyon Press in 2012. She is a Lannan Literary Fellow and a Native Arts Council Foundation Artist Fellow. She was awarded a Bread Loaf Fellowship, the Holmes National Poetry Prize, a Hodder Fellowship, and a PEN/Civitella Ranieri Foundation Residency, as well as being awarded a US Artists Ford Fellowship. Diaz teaches at the Arizona State University Creative Writing MFA program. She splits her time between the east coast and Mohave Valley, Arizona, where she works to revitalize the Mojave language.

Queer migrant poet, cultural organizer, and activist from Harlem by way of Ecuador, Sonia Guiñansaca is a VONA/Voices alumnus who has performed at El Museo Del Barrio and The Metropolitan Museum of Art, and whose work has been featured at, on or in NBC, PBS, Latina, PEN America, The Poetry Foundation, and elsewhere. A 2017 Artist in Residence at NYU's Hemispheric Institute of Performance and Politics, she has emerged as a national leader in the undocumented/migrant artistic and political communities, has co-founded and help build some of the largest undocumented organizations in the country, and has collaborated widely with undocumented writers and artists. She is currently Managing Director at CultureStrike.

Demian DinéYazhi´'s artwork is materialized through the lens of art production, site-specific installation(s), poetic expression, social engagement, and curatorial inquiry. DinéYazhi´ was raised in a matrilineal household and his maternal grandfather served in the U.S. Marine Corps as a Navajo Code Talker. The undercurrents of DinéYazhi´s work include a reverence toward traditional Diné practices, storytelling, traditional ceremonies, and acknowledging the criticality and sacredness of land, while simultaneously challenging contemporary archetypes of authenticity and jurisdiction. He received his BFA in Intermedia Arts from Pacific Northwest College of Art in 2014. Demian is the founder of the artist/activist initiative R.I.S.E.: Radical Indigenous Survivance & Empowerment. DinéYazhi´ also serves as co-editor of the zine Locusts: A Post-Queer Nation Zine. He is the recipient of the Henry Art Museum's Brink Award 2017 and will have a solo exhibition opening at the Henry Art Gallery, Seattle, WA in March 2018. 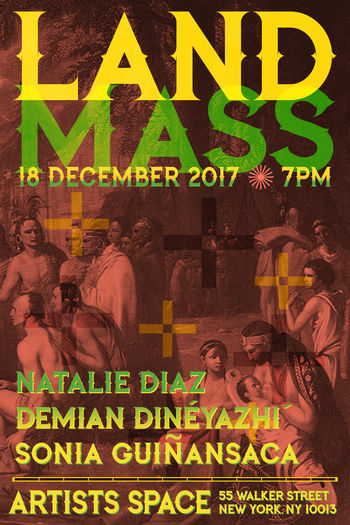