What is today known as New York City stands in the original location of Mannahatta (a Munsee Delaware (Lenni-Lenape) word meaning “rocky or hilly island”). Ecologically diverse, many Native American peoples converged here in vibrant economic and social exchange. A similar spirit today drives the city. While histories of immigration and internationalism have been significant within the city’s rich modern and contemporary cultural innovations, Indigenous artists have also importantly contributed to these developments. Native techniques and practices were influential in the formation of abstract expressionism and artists as celebrated as Robert Rauschenberg and Leon Polk Smith had Cherokee heritage. The artist-curator Lloyd Oxendine opened the American Art Gallery, the first contemporary gallery dedicated to Native American art, on the same block as Artists Space in SoHo in 1970, ushering in a period of self-organized experimentation and collaboration that lead to the establishment of institutions such as the American Indian Community House (AICH) gallery and American Indian Artists, Inc. (AMERINDA).

No Reservation (AMERINDA, 2017) marks the first time that a Native American contemporary art movement – here specifically, the New York Contemporary Native American Art Movement – has been defined as such in print. Written by Nednai-Chiricahua Apache/Montauk/Shinnecock artist David Bunn Martine, it describes the dynamism of Native American artmaking in New York City within theater, visual art, and filmmaking, through both overarching theoretical studies and individual artist profiles. To mark the book’s launch, AMERINDA director Diane Fraher has convened Martine and three other leading Native American artists: G. Peter Jemison, Jaune Quick–to–See Smith, and Athena LaTocha, for a conversation that frames the rich diversity of Native art practices in New York City and further afield today, touching on the vibrant legacy of Oxendine and Polk Smith and acknowledging the contributions of Native theater to the movement.

Diane Fraher (Osage/Cherokee) is a filmmaker and founder of AMERINDA. Her films explore the struggle of Native Americans to identify with traditional values within the context of modern society. She knew and worked closely with Lloyd Oxendine, who supported her in the founding of AMERINDA and the mission of conserving the legacy of the New York Contemporary Native American Art Movement.

A member of the Heron clan of the Seneca Nation, G. Peter Jemison, is a painter, printmaker, curator, filmmaker, and author who has been exhibiting his work for over four decades.

Jaune Quick-to-See Smith (Salish) is an internationally known artist, curator and printmaker who uses humor and satire to examine the myths, stereotypes and paradoxes of American Indian life in contrast to the consumerism of American society. Her work is philosophically centered by her strong traditional beliefs and political activism.

Athena LaTocha (Hunkpapa/Ojibway) is an abstract painter and curator who rejects most traditional painting and drawing tools in favor of unorthodox practices. As a curator with AMERINDA she was mentored by Lloyd Oxendine (Lumbee). She represents a current generation of artist/curators of the New York Movement whose work is grounded in traditional beliefs and community.

David Bunn Martine (Chiricahua Apache/Shinnecock/Montauk) is a painter, curator and writer who grew up exhibiting with New York Movement Founder, Lloyd Oxendine (Lumbee). Following in his mentor Oxendine’s footsteps, he received an Andy Warhol Foundation for the Visual Arts Curatorial Research Fellowship in 2012 for which he is the author of No Reservation: New York Contemporary Native American Art Movement.

No Reservation is organized in conjunction with the exhibition Unholding (November 19, 2017 – January 21, 2018) 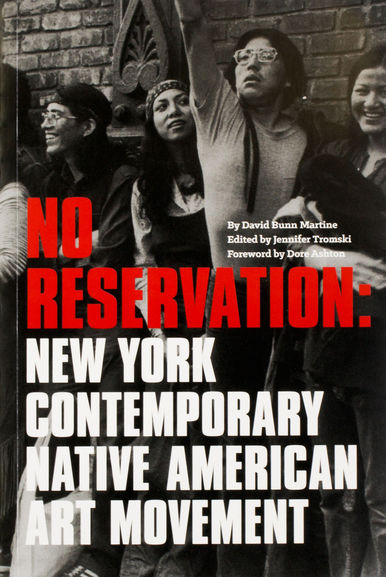