A reflection on dOCUMENTA (13) Notebooks by Avital Ronell,
with a response by Carolyn Christov-Bakargiev
Chaired by Bettina Funcke and with comments by Lawrence Weiner

A note is a trace, a word, a drawing that all of a sudden becomes part of thinking, and is transformed into an idea. This publication project follows that path, presenting the mind in a prologue state, in a pre-public arena.

As a prelude to, and central element of dOCUMENTA (13), the publishing project 100 Notes – 100 Thoughts took the form of one hundred “notebooks,” comprising facsimiles of existing documents, commissioned essays, collaborations and conversations. With contributions by authors from a range of disciplines, such as art, science, philosophy and psychology, anthropology, economic and political theory, language and literature studies, as well as poetry, these publications can be seen to have activated an arena of intuitive knowledge mirrored in the wider scope of dOCUMENTA (13) itself.

In May 2011, Artists Space hosted a New York launch event for the Notebook series at which dOCUMENTA (13) Artistic Director Carolyn Christov-Bakargiev, Head of Publications Bettina Funcke and some contributors to the series introduced the format of the notebook as a means to “present models of connection-making between the private and the public, between the pre-stage of intuitions, the naming of ideas and the key-chain of arguments.” After the close of dOCUMENTA (13), this second event at Artists Space looks at the propositional nature of the series in the retrospective light of an exhibition that highlighted artistic research and the relations between modes of thinking and living.

The event will center on a presentation from theorist Avital Ronell, whose diverse writing has often functioned to speculate on the positions of author and reader, and to work within conditions of unknowability and openness. Carolyn Christov-Bakargiev will respond to Ronell’s talk, with additional comments from Lawrence Weiner. 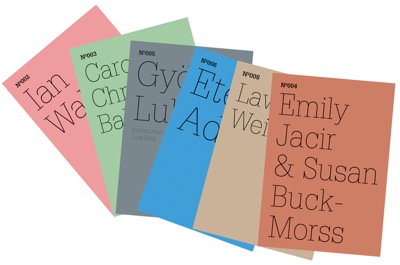