Art and its Operations
David Joselit and Pamela M. Lee

This event marks the launch of two publications, and brings together their art historian authors David Joselit and Pamela M. Lee, for a conversation that will develop shared territory around the nature of the contemporary art work as an agent within globalised networks.

David Joselit’s After Art (Princeton University Press, 2012) considers how, in an age of accelerated digital imaging and communication technologies, artists and architects are emphasizing networks and visualizing patterns of dissemination after objects and structures are produced. Joselit argues for a shift in critical emphasis from the production of art, and its intentions, to what “images do once they enter circulation in heterogenous networks.” Through addressing such processes he asserts the power of images in their “capacity for replication, remediation and dissemination at variable velocities.” After Art examines the work of artists including Ai Wei Wei and Sherrie Levine, alongside architectural firms such as OMA and Foreign Office, considering how works of art crystallize out of populations of images, and buildings emerge out of the dynamics of the circulation patterns they will house.

Pamela M. Lee’s Forgetting the Art World (MIT Press, 2012) connects the current state of the “art world” to globalization and its attendant controversies. Considering the eclipse of a historical notion of an art world, by the velocity of global exchange that dissipates its borders, Lee argues that the work of art is itself both the object and agent of globalization. She speaks of “the work of art’s world”, pointing to both the work of art’s mattering and its materialization, and an understanding of the activity performed by the object as utterly continuous with the world it at once inhabits and creates. Through close readings of the work of artists such as Thomas Hirschhorn, the Atlas Group, and Andreas Gursky Forgetting the Art World explores the ways in which art actualizes, iterates, or enables the processes of globalization.

David Joselit is Carnegie Professor of the History of Art at Yale University, and an editor of October. His publications include Feedback: Television Against Democracy (MIT Press, 2007), and Infinite Regress: Marcel Duchamp 1910-1941 (October Books; MIT Press, 1998). He is a regular contributor to art periodicals such as Artforum, Art in America and October.

Pamela M. Lee is Professor of the History of Art at Stanford University. She has published two books: Object to be Destroyed: The Work of Gordon Matta-Clark (MIT Press, 2000) and Chronophobia: On Time in the Art of the 1960s (MIT Press, 2004), and has contributed articles to magazines and journals including October, Grey Room, Artforum and Texte Zur Kunst. 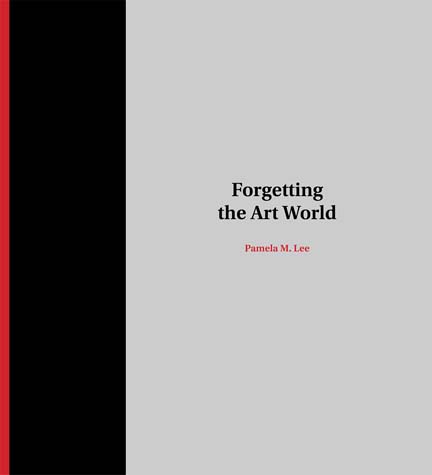