Founded in 2004, the Paris-based collective artist Claire Fontaine declares a position as a “readymade artist.” Having assumed the name of a popular French brand of notebooks, her practice centers on the production of works in neon, video, sculpture, painting and text. Her version of neo-conceptual art implicates the exchangeability and disintegration of notions of authorship. Her position stems from the awareness of the shared condition of political impotence and the crisis of singularity within contemporary society today.

Over recent years Claire Fontaine has elaborated on – through texts and artworks – the concept of “human strike.” She writes that:“The term ‘human strike’ was forged to name a revolt against what is reactionary even – and above all – inside the revolt itself. It defines a type of strike that involves the whole life and not only its professional side, that acknowledges exploitation in all the domains and not only at work. Even the notion of work comes out modified if seen from the ethical prism of human strike: activities that seem to be innocent services and loving obligations to keep the family or the couple together reveal themselves as vulgar exploitation. Human strike is a movement that could potentially contaminate anyone and that attacks the foundations of life in common, its subject isn’t the proletarian or the factory worker but the whatever singularity that everyone is. This movement isn’t there to reveal the exceptionality or the superiority of a group on another but to unmask the whateverness of everybody as the open secret that social classes hide.”
In the context of the exhibition Anarchism Without Adjectives: On the Work of Christopher D’Arcangelo (1975-1979), Claire Fontaine will deliver a talk on the notion of “human strike.” 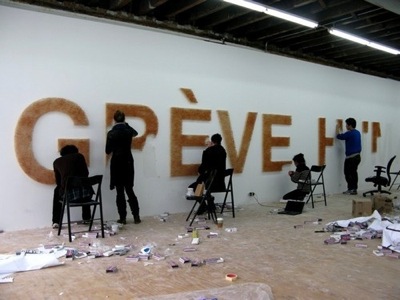