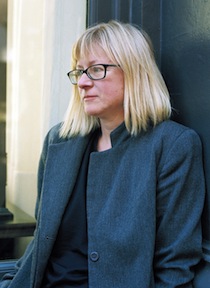 It was not easy convincing Helen to make a talk for Artists Space. When she did agree, she told me that the title would be one of the following:

Mallarmé thought it was the business of the poet to purify the dialect of the tribe. Early Wittgenstein and the Vienna Circle thought purification was the business of the philosopher. (Ask of any sentence: What does this MEAN? If it has no truth value, it is meaningless.) Late Wittgenstein and J L Austin made purity look like a red herring: if the meaning of a word is how it is used, we can describe language games and speech acts, but only an idiot (surely) would think this raw material for purification. And if we look at the intellectual and artistic developments of the C20: Modernism -> Postmodernism -> Postpost...Structuralism -> Poststructuralism, we find, what, something like display of impotence in the face of chaos.


Author of The Last Samurai (2000) and Lightning Rods (2011), and described by Bookforum as a “Maryland-born polymath,” Helen has since the late 1990s waged a quiet war on the intransigence of the social machines that govern language. Her novels are erudite, yet instructive and satirical, stemming from seemingly preposterous declarations: “what if a boy could choose his father? What if the mechanisms of a sexual fantasy could be used to solve the problem of sexual harassment?” The acquisition and application of knowledge, and the fallibility of the speech act provide the tent poles of her work.

In recent months, Helen’s output has again been privately funneled into completing a tangible product to surrender to the industry. From what I understand, this process has not been particularly pleasant for her. Nor have we seen much output on her blog lately. Among many, these are some of the reasons why I invited her to give a talk.