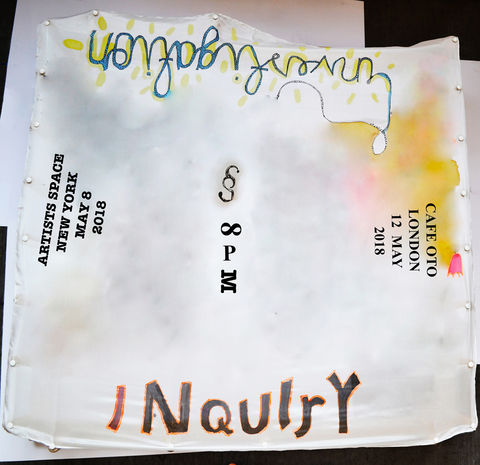 Inquiry & Investigation is a performance by Lolina and Johanna Ulfsak at Artists Space and Cafe Oto. It is a detective drama set in present day New York and London. Disguised as an art and design student from Central Saint Martins, a private detective arrives at the nearby St. Pancras railway station, a landmark of the Industrial Revolution. She next visits Jefferson Market Library, where her inquiry is turned towards the legacy of the printed press. Finally, she contemplates the digital world in front of Rudolph de Harak’s illuminated clock on the façade of an apartment building at 200 Water Street.

Inquiry & Investigation is filmed in daylight in predominantly Gothic Revival settings. Sharing the time of its origin with early detective novels, this architecture is suggestive of an atmosphere of suspended resolution, and provides a mise en scène for the protagonist’s fears of misplacing the truth. Yet the city offers few answers; its windows are screens that merely reflect the detective’s thought process back at her.

The film will be projected onto the front windows of Artists Space and Cafe Oto, which have been covered with Privacy Control frosted window film. The performance also consists of an improvised musical accompaniment and additional videos selected live.

A note on access:
Artists Space is accessible via elevator from street level, welcomes assistance dogs, and has wheelchair accessible non-gender-segregated toilet facilities. For access inquiries please contact Artists Space at info@artistsspace.org or
212 226 3970.

With thanks to The Friends of Artists Space and Outset Estonia