In conjunction with the exhibition Jack Smith: Art Crust of Spiritual Oasis on view through September 9, Artists Space and Metrograph present a six-program retrospective of Jack Smith’s visionary films, including Flaming Creatures (1962-63), Normal Love (1963-64), and I Was a Male Yvonne De Carlo (1960s-70s). The series will also feature rare and previously unseen documentation of Smith’s live performances, as well as his work as an actor in the films of Ken Jacobs and Ron Rice. All screenings will take place at Metrograph.

Jack Smith’s (1932–1989) virtuosic output is revered for its caustic humor, self-invention, and debasement of institutional authority, which intensified throughout his ever-evolving work. Yet, since his death from AIDS-related pneumonia in 1989, his artistic legacy has proven to be similarly incalcitrant and resistant to cleancut narrativization. In history, as in life, Smith’s oeuvre exists in renegade defiance of the capitalist imperatives of commodification and containment, as vilified in his philosophical fabulations of “lucky landlordism,” “rented island,” “art crust,” and “black light of false lighthouse capitalism.” Smith’s vision is one that consequently imbues art into life and has fundamentally articulated avant-garde film, performance, and critical discourse in New York from the 1960s to the present.

Explorations of an “Aesthetic of Delirium"

In a period of collaboration with the likes of Ken Jacobs, Marian Zazeela, and Tony Conrad, Jack Smith produced films characterized by their hallucinatory, frenetic vision. In Scotch Tape, his cast dances across a landscape of industrial wreckage (the future site of Lincoln Center), while Eddie Duchin’s rhumba “Carinhoso” sounds in the background. The Kodachrome color film, which intercuts overhead shots with disorienting close-ups, gets its title from a piece of scotch tape visibly stuck to the left corner of the frame throughout the film. Smith’s Overstimulated, a silent reel later used in his live film performances, deliriously depicts actors Jerry Sims and Bob Fleischner frantically jumping up and down in a room filled with mysterious objects and debris. The program ends with Smith’s most notorious—and his only completed—film, Flaming Creatures, which was seized by the NYPD at the time of its debut and became the subject of a censorship battle over its lascivious content. In the film, Smith conjures a mess of entangled limbs and genitalia that writhe in a euphoric fit of sexual desire.

Following the controversy over Jack Smith’s Flaming Creatures and the subsequent seizure of the film by the NYPD, Smith never completed another film. Shown in many versions and often edited live in his film performances, Normal Love is emblematic of Smith’s new approach to filmmaking. The film features many of Smith’s “creatures” including Mario Montez (whose stage name pays homage to Maria Montez, Technicolor star and Smith’s lifelong muse) cast in the role of a mermaid, and the Velvet Underground’s Angus MacLise as a mummy. Enacting his “pasty” fantasy of Atlantis through scenes of bacchanalian excess, Smith’s exotic creatures bathe in a pool of milk, cavort with a slithering cobra, and chase each other through the woods in Edenic pursuit. In this visually entrancing work, Smith privileges the color and texture of his subjects over a comprehensive narrative. This program will also include the coda to Normal Love entitled Yellow Sequence, which features outtakes from the film.

This screening features documentation and reconstructions of various live performances Smith gave throughout the 1970s. Originally shot on a Sony 3/4” Portapak, Midnight at The Plaster Foundation is the only known sound recording of a Jack Smith performance at his legendary loft-performance space in SoHo, the Plaster Foundation of Atlantis. Following Smith’s eviction from the Plaster Foundation, Smith cast himself in the role of Hamlet in his play and unfinished film Hamlet in the Rented World. Guided by the original scripts, filmmaker and preservationist Jerry Tartaglia reconstructs Smith’s play in a 27-minute assemblage, which features shooting sessions overlaid with audio recordings of Smith’s voice taken during rehearsal readings. In both his midnight performance at the Plaster Foundation and in Hamlet in the Rented World: A Fragment, Smith rehearses and repeats his lines, often becoming frustrated by the failure of his own delivery. In a video created for the seminal 1997 retrospective at MoMA PS1 Jack Smith: Flaming Creature: His Amazing Life and Times, curator Ed Leffingwell meticulously pairs a sequence of slides of Smith’s performance of Ibsen’s Ghosts entitled The Secret of Rented Island (1977) with the prerecorded audio tape created by Smith as its soundtrack. Other short clips feature Smith preparing for a slideshow in Cologne, Germany, tossing Easter eggs into a pool in front of the Washington Monument, and performing Brassieres of Uranus at the Funnel Experimental Film Theater in Toronto, Canada.

In this four-part screening, Jack Smith fashions himself and his actors as politicians, celebrities and drag queens. In response to the 1968 presidential campaign, Smith’s No President, originally titled The Kidnapping of Wendell Wilkie by the Love Bandit, juxtaposes black and white found footage from Willkie’s 1940 presidential campaign with Smith’s costumed and masked creatures. I Was A Male Yvonne De Carlo opens with a sound bite from Smith’s film No President juxtaposed with footage of steam escaping New York City manholes. The scene abruptly shifts to the inside of Smith’s detritus-filled loft, where Warhol Superstar Ondine snaps glamour shots of a visibly bored Smith and an attendant nurse whips a crowd of zealous fans. Playing the role of Yvonne De Carlo, Hollywood starlet and Maria Montez’s successor (and in Smith’s words, “a walking career”) Smith embodies a corrupted celebrity, preying on his devoted followers. In Song for Rent, Smith stars as the drunk and delirious matron Rose Courtyard (inspired by Rose Kennedy), who sits in a room filled with trash and decaying corpses while Kate Smith’s “God Bless America” plays in the background. Meanwhile Jungle Island (aka Reefers of Technicolor Island) captures Mario Montez in a psychedelic, pot-filled, tropical fantasy-land. Cloaked in glamour and excess, these films depict the sinister side of a distinctly American obsession with fame, wealth, and beauty in a detritus-ridden capitalist world.

Shot on a ¾ inch open reel, this never-before-seen video documents a complete live performance by Jack Smith. Characteristic of the unique performance style Smith developed throughout the 1970s, he is seen on stage rearranging props, playing music, and occasionally addressing the audience before disappearing behind a curtain. Equally mesmerizing and frustrating, the footage captures a Smith performance in its typically unresolved, unpredictable, and improvisatory state. World premiere.

Jack Smith first appeared in the avant-garde scene as an actor of sorts, starring in a number of performance-driven films by Ken Jacobs. After meeting at the City College of New York, the two began a period of intense collaboration, working together on a series of films that dramatize the relationship between actor and filmmaker, subject and camera, Hollywood and the avant-garde. The program begins with Jacob’s The Whirled, a series of four short films starring Jack Smith: Saturday Afternoon Blood Sacrifice (1956), Little Cobra Dance (1956), Hunch Your Back (1963) and Death of P’Town (1961). Shot on two 100' 16mm rolls, the films capture Smith gallantly leading a ceremonial blood-letting, stalking a Provincetown cemetery as a “fiery vamp,” and graciously receiving an academy award in the form of a melted candle stick in his loft on Reade Street. Constructed from abandoned footage of Smith shot by Bob Fleishner, Blonde Cobra is a “light monster-movie comedy” that takes inspiration from the Hollywood flick Cobra Woman (1944), starring Smith’s muse Maria Montez. Scored with repetitious voiceovers by Smith and songs from the 1920s, the film captures a luridly costumed Smith smoking and applying make-up. Little Stabs at Happiness, explores the affective possibilities of despair, dramatizing boredom and sexual rejection, which is heightened by Smith’s turbulent voice-overs. The program ends with Ron Rice’s hallucinatory Chumlum (1964). Shot during lulls on the production set of Smith’s Normal Love, the film features Smith’s actors Mario Montez, Beverly Grant and Gerald Malanga and a soundtrack by Angus MacLise and Tony Conrad.

Chumlum restored by Anthology Film Archives and The Film Foundation with funding provided by The George Lucas Family Foundation. Special thanks to John Klacsmann. 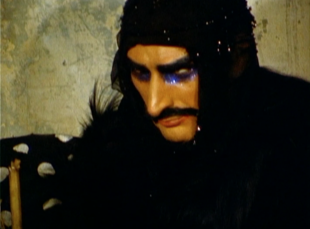 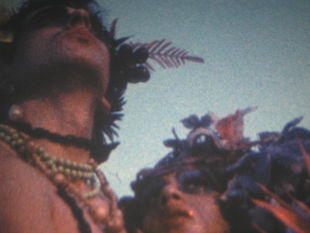 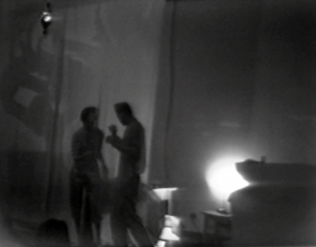 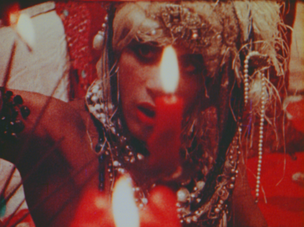 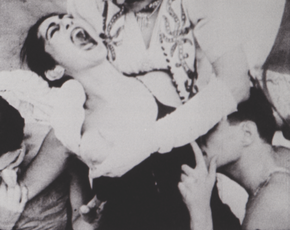 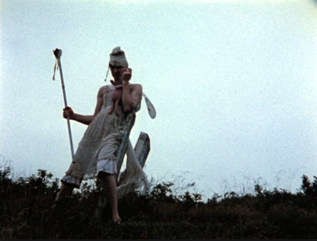 Presented in collaboration with:

Film stills (from top to bottom):