In 1975 Christopher D’Arcangelo participated in the group exhibition Lives: Artists Who Deal With Peoples’ Lives (Including Their Own) As The Subject And/Or The Medium of Their Work, curated by Jeffrey Deitch. After meeting at John Weber Gallery in New York where both were working at the time, their dialogue resulted in an essay by the curator that focused on the artist’s actions in New York museums.

Jeffrey Deitch will be in conversation with curator Jay Sanders discussing D’Arcangelo’s work, its critical position in relation to the museum, and the particular cultural context of New York in the mid 1970s.

Jeffrey Deitch is currently the Director of the Museum of Contemporary Art, Los Angeles. Prior to this appointment, Deitch was a dealer in modern and contemporary art and an art advisor for thirty-five years. In 1996 he founded the commercial gallery Deitch Projects, which remained open until 2010. In the 1970s, Deitch served as Assistant Director of the John Weber Gallery in New York and in 1975 curated the group exhibition Lives: Artists Who Deal With Peoples’ Lives (Including Their Own) As The Subject And/Or The Medium of Their Work at the Fine Arts Building, New York, that included the work of Christopher D'Arcangelo.

Jay Sanders is a curator and writer based in New York. He is currently co-organizing the 2012 Whitney Biennial with Elisabeth Sussman. Previously, he was a Gallery Director at Greene Naftali where he organized numerous exhibitions and events. He has programmed performance, music, and film programs at such venues as the former Whitney branch at Altria, Issue Project Room, Anthology Film Archives, Sculpture Center, EAI, The Stone, Tonic, and for Performa. Sanders' writing has appeared in Artforum, Parkett, Texte zur Kunst, BOMB, and other publications. 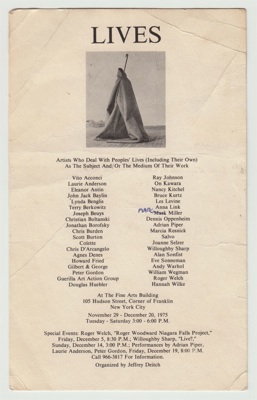