A WikiLeaks fundraiser at art berlin contemporary 2012,
organized by Artists Space, New York.
Scarves and t-shirts for sale September 14 – 16, with proceeds to WikiLeaks.

The design studio Metahaven (founded by Vinca Kruk and Daniel van der Velden) works at the intersection of research and design, particularly addressing the manner in which branding and visual identity relate to notions of statehood, social and political transparency, and informational networks. Their projects stem both from direct commission and self-initiated research, a relationship to a client actual or otherwise emphasizing the position of design at a point between service provision, critical inquiry, and polemical proposition.

Since mid-2010, Metahaven have undertaken a body of research, discourse and production that revisits the visual identity of WikiLeaks. With the nominal consent of Julian Assange, this expansive design project has functioned on several fronts, at the heart of which is an investigation into the politics and aesthetics of transparency. Metahaven have sought to map the relations through which WikiLeaks functions, looking not towards the mechanics of its operations but to the media relations and reputational networks that have sprung up around it. The organization is constituted by a necessary opacity – employed in order to offer anonymity to the whistleblower and abstract the leak from its source – while paradoxically asserting the principle of transparency. Within a number of propositions for revisions to the WikiLeaks identity, Metahaven references the image economy circulating around the organization, alongside the notion of “transparent camouflage” as both aesthetic gesture and political strategy.

As part of Artists Space adjunct program for art berlin contemporary 2012, Metahaven are presenting an installation that serves simultaneously as a mapping of this research project, and a retail display. Applying the visual syntax at work in their identity proposals, they have created a number of products, including scarves and t-shirts that will be sold in order to raise funds for WikiLeaks. WikiLeaks since 2010 is under a financial embargo by MasterCard, VISA and PayPal, which prevents the site from receiving direct donations. In the opaque sales context of abc, Metahaven's project functions as a platform for a polemical mode of commercial transaction. 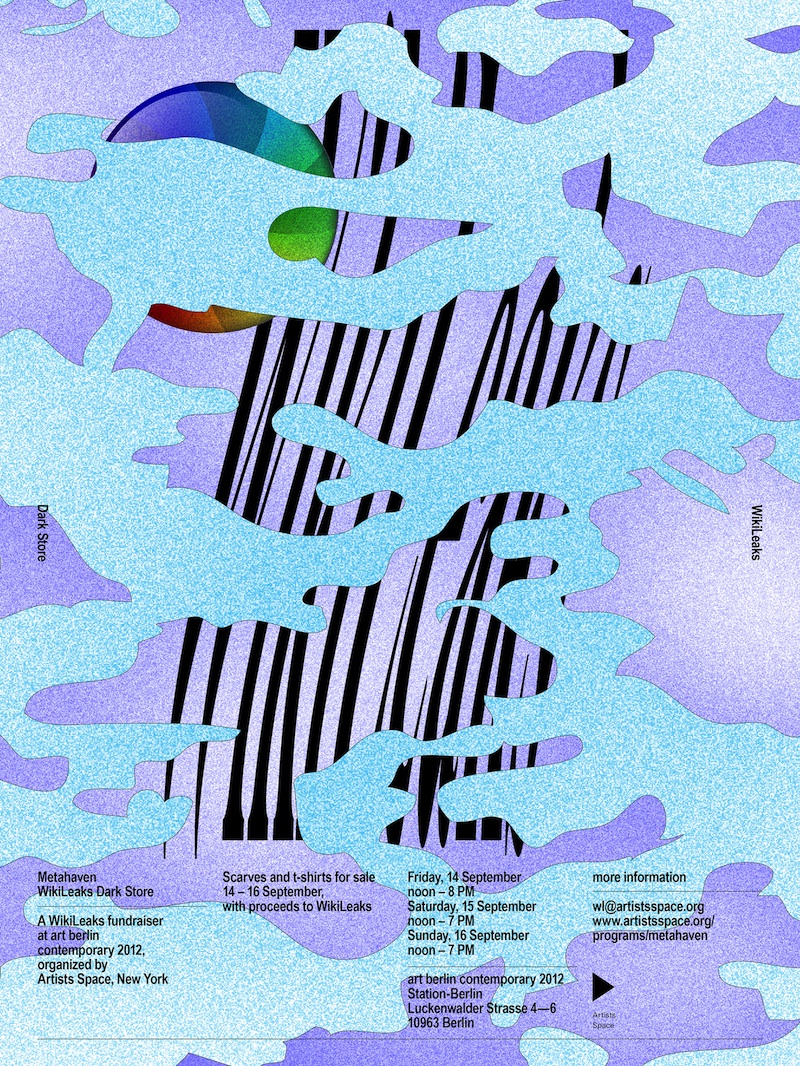