"The aesthetics, style, creativity and temper of extreme subcultural lifestyle would ... become a vital aspect of Clark's work as a dancer and choreographer. Absurdist, confrontational, richly aesthetic and provocative - a Through-the-Looking-Glass sensibility, in which vulgarity, covert intellectualism, deliberate obscurantism and an uncompromising rigor were commingled..."
- Michael Bracewell, An Evening of Fun in the Metropolis of Your Dreams, 2011

Notorious for his continually subversive takes on classical dance, Michael Clark is without doubt one of the most important dancers and choreographers of our time. He has created some of contemporary dance's finest productions, including I Am Curious, Orange, 1988; Mmm, 1992; and come, been and gone, 2009. Situated at the heart of the British postpunk art scene, Clark is much admired for his judicious choice of collaborators, such as designers Bodymap, artists Cerith Wyn Evans, Leigh Bowery, Charles Atlas and bands such as The Fall, Laibach and Wire. He has been the subject of films and documentaries including the fictional biography Hail the New Puritan by Charles Atlas, and The Late Michael Clark, directed by Sophie Fiennes. In 2010 and 2011 Michael Clark Company was resident in the Turbine Hall of Tate Modern, London.

This event launches the first monograph on Michael Clark, celebrating the whole of his career to date, from the late 70s to the present. Rich in visual and archival material, it contains new essays on Clark's work, photography by Hugo Glendinning, Richard Haughton, Nick Knight, and others, plus interviews with many of Clark's collaborators from the worlds of dance, art, fashion and music. 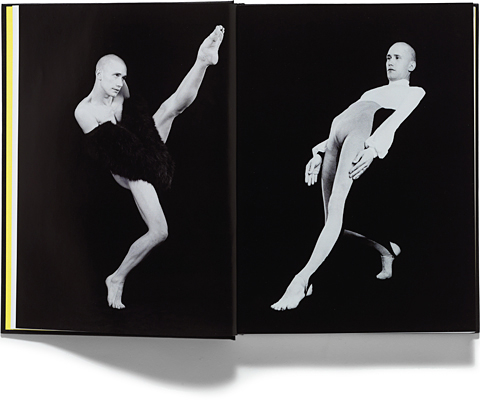 Michael Clark photographed by Hugo Glendinning for the production Mmm..., 1992