As part of its contribution to Whitney Biennial 2012, Artists Space presents the third of three symposia that address themes in response to the Biennial. Taking as its starting point the 2012 Whitney Biennial’s allocation of the fourth floor Emily Fischer Landau Galleries as a performance space for music, dance, theater, and participatory programming, this series of talks considers the status of performance and “virtuosity” within the parameters of an institutional public sphere. Does this turn towards “activity without end product” potentially shift entrenched relations between institution and artist, artwork and viewer, or reinforce a contemporary experience of totalizing social production?

In the light of the address of performance and the durational in the Whitney Biennial, Professor of Arts and Humanities at UC Berkeley Shannon Jackson, editor of artforum.com David Velasco and choreographer Sarah Michelson, present perspectives on the relationship between performative practices and the art institution. The event will encompass presentations and conversations on both the nature of performance as constituted by socio-political relations, and the potentially more formalized experience of theater and dance within a museum’s galleries.

Shannon Jackson is Distinguished Professor in the Arts and Humanities at University of California, Berkeley, and Director of the Arts Research Center. Her recent publications include Social Works: Performing Art, Supporting Publics (Routledge, 2011) and Professing Performance (Cambridge University Press, 2004)

David Velasco is editor of artforum.com and a regular contributor to Artforum. His contribution to the May issue of the magazine was a review of the performance program in the current Whitney Biennial.

Sarah Michelson is a choreographer whose work Devotion Study #1 — The American Dancer featured on the fourth floor of Whitney Biennial 2012 in early March. Her work has previously been presented at The Kitchen, New York, and The Walker Art Center, Minneapolis amongst other venues.


Working the No Work
A conversation between Georgia Sagri and Stephen Squibb
Tuesday May 29, 7pm

Artist Georgia Sagri’s contribution to Whitney Biennial 2012 comprises an evolving installation on the museum’s fifth floor mezzanine. As a site for a series of performances by Sagri over the course of the three-month exhibition, under the title Travailler Je ne travaille pas (working the no work), her regular presence is framed as a process of producing, editing and publishing a “live book.” Sagri’s performances revolve around a variety of repetitious compositions of sound and gesture – the central theme of these acts and the installation as a whole is the nature of work, and in particular the notion of “working the no work,” an effort to articulate and disturb structures of capitalist labor.

For this event Sagri will be in conversation with writer Stephen Squibb, discussing her Biennial project and broader concerns around the relationship between performance, anarchy, political organizing and the (art) institution.

Stephen Squibb is a founding member and artistic co-director of installation theater producers Woodshed Collective. He writes regularly for artforum.com, art agenda, and n+1. Recent texts include “The Materialist Gesture: On Quentin Meillassoux” in French Theory Today, (The Public School, New York), and “Dispatches from Occupy Boston” in Occupy!, (Verso). He is a PhD candidate in English at Harvard University. 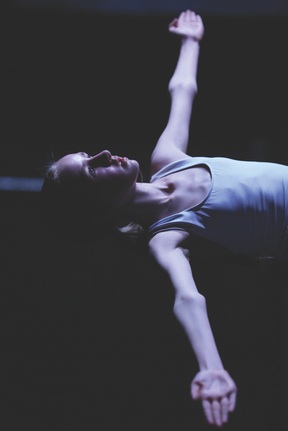 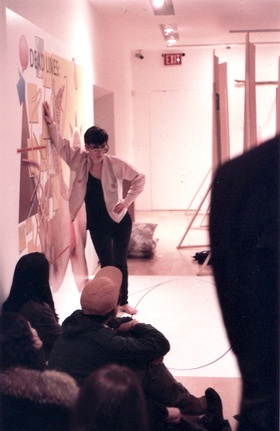