No one can write about architecture in California without acknowledging her as the mother of us all.
– Reyner Banham

Edited and introduced by Susan Morgan, Piecing Together Los Angeles: An Esther McCoy Reader is the debut book title from East of Borneo, and the first collection of writings by Esther McCoy (1904-1989). This launch event will feature a discussion of McCoy’s extensive writing life between writer and publication editor Susan Morgan, architecture and design critic Alexandra Lange, and artist Andrew Spence. The conversation will be preceded by a screening of Dodge House 1916 (1965), a short film directed by Robert Snyder and written and produced by Esther McCoy as part of her campaign to preserve one of California architect Irving Gill's great houses.

McCoy’s impressive writing life spanned sixty years and charted the progressive territory of American idealism. During the 1920s, she pursued her vocation as a writer and apprenticed with novelist Theodore Dreiser. In 1932, McCoy moved to Los Angeles where she wrote for literary journals, popular magazines and progressive broadsheets. Her short stories were awarded numerous prizes, featured in publications ranging from Harper's Bazaar to The California Quarterly, and adapted for radio and television. After completing a wartime stint as an engineering draftsman at Douglas Aircraft, McCoy went to work as an architectural draftsman for R. M. Schindler. By 1945, her attentive writing had turned significantly to architecture and the design-driven optimism of post-war Los Angeles. Her essays appeared regularly in the Los Angeles Times, Arts & Architecture, Zodiac, Progressive Architecture, and Architectural Forum, and her 1960 book Five California Architects has long been acknowledged as an indispensable classic.

Alexandra Lange is an architecture and design critic, and author of Writing About Architecture: Mastering the Language of Buildings and Cities (Princeton Architectural Press, 2012). Her work has appeared in The Architect's Newspaper, Architectural Record, Dwell, Metropolis, Print, New York Magazine and The New York Times. She is co-author, with Jane Thompson, of Design Research: The Store That Brought Modern Living to American Homes (Chronicle, 2010). She teaches architecture criticism in the D-Crit Program at SVA and the Urban Design & Architecture Studies Program at NYU.

Susan Morgan has written extensively about art, design, and cultural biography. Her work has been featured in exhibition catalogues, artist monographs, and publications ranging from The New York Times to The World of Interiors. With Thomas Lawson, she co-founded and co-edited REAL LIFE Magazine, an alternative art publication produced throughout the 1980s. She currently serves as contributing editor for Aperture and East of Borneo. Morgan co-curated the 2011 exhibition Sympathetic Seeing: Esther McCoy and the Heart of American Modernist Architecture and Design (MAK Center for Art and Architecture, Los Angeles, at the Schindler House).

Andrew Spence is a New York-based artist and faculty member at Bennington College. He has shown in museums and galleries including the Whitney Museum of American Art, the Hirshhorn Museum, and the Metropolitan Museum of Art. He came to know Esther McCoy as her student at The University of California at Santa Barbara, and they maintained a close relationship until her death in 1989.

With thanks to the Archives of American Art, Smithsonian Institution. 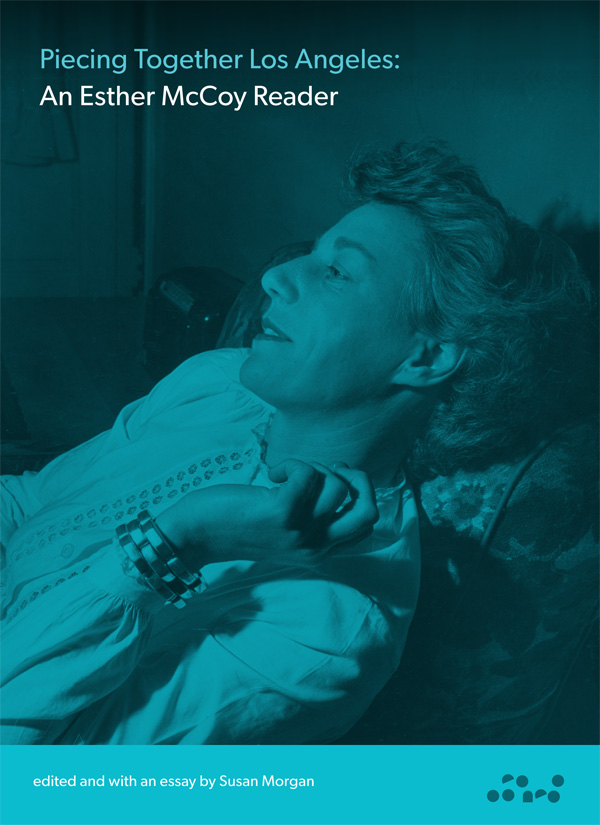 Courtesy of East of Borneo Books/CalArts