Powerpoint and the Perfume of Reading
Tan Lin

Responding to an invitation from Artists Space to contribute a text to an exhibition publication, in Spring 2012 writer Tan Lin produced two works on Powerpoint that implicate the nature of reading and writing beyond the printed page. For this event, Bibliographic Sound Track and The Ph.D Sounds will be projected with the former accompanied by a live perfume soundtrack, the latter with a DJ set by Mösco dj. In collaboration with Triple Canopy, the event will also include a forum discussion between Triple Canopy editor Dan Visel, Artists Space curator Richard Birkett and Tan Lin.The two videos explore communications platforms such as Twitter, SMS, status updates, IM chats, programming languages, video game walk-throughs, the couplet, and the Powerpoint slide, as they affect reading and genre. The screening event performs an audience’s reading in an environment that has absorbed everything next to it in the room – from bibliographies to the smell of wet spanghum peat moss, the perfume Wet London Pavement, Glade Everglade Air Freshener and the music of New Order and Lucky Dragons.

Tan Lin is the author of more than ten books, including Heath (Plagiarism/Outsource) (2009) and 7 Controlled Vocabularies and Obituary 2004. The Joy of Cooking (2010). His work has appeared in numerous journals including Artforum, Cabinet, and The New York Times Book Review and his video work has screened at the Yale Art Museum, the Drawing Center, and the Ontological Hysterical Theatre. 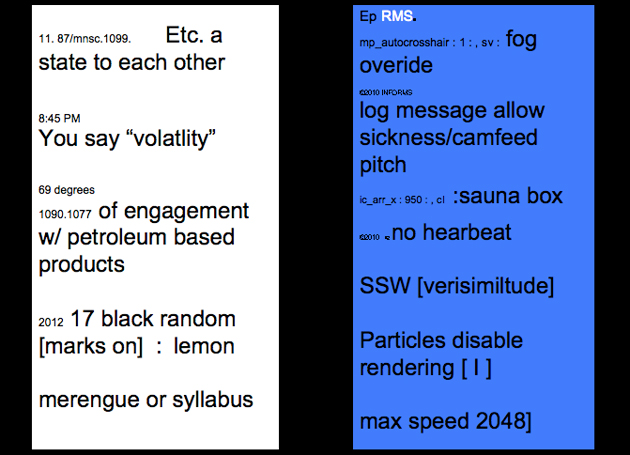