Artists Space, in partnership with the queer film series Dirty Looks, presents a new translation overseen by Bruce Benderson of the 1979 experimental documentary Race d’Ep! (previously released in English as The Homosexual Century). Made by the “father of queer theory” Guy Hocquenghem, in collaboration with radical filmmaker Lionel Soukaz, Race d’Ep! traces the confluence between the development of photography in the 19th Century, and subsequent representations of homosexual desire. The film was accompanied by the publication Race d’Ep!: Un Siecle D’Images de l’Homosexualite by Hocquenghem, and moves from the nudes of Baron von Gloeden and early sexology, to gay liberation and cruising on the streets of Paris in the 1970s.

Influenced by the writings of Michel Foucault on the history of sexuality, and reflecting the revolutionary queer activism of the Parisian movement Front Homosexuel D’Action Révolutionnaire, Race d’Ep! is a frank documentary charting the visibility and representation of gay culture.

Race d’Ep! caused scandal when it was released in France. The film was censored and classified as a pornographic film under the “X Law.” Roland Barthes, Gilles Deleuze, Felix Guattari, Marguerite Duras, Simone de Beauvoir, Patrice Chéreau, and Cahiers du Cinéma, among others, signed a petition in defense of the film and opposing its persecution and censorship by the government. Michel Foucault wrote a letter to the Ministry of Culture on behalf of Race d’Ep!, stating that “this documentary is based on historical research whose seriousness and interest I had the chance to prove,” going on to observe, “it seems strange for a film about homosexuality to be penalized when it tries to remember the persecutions of which the Nazi regime has been responsible.”

Not screened in the US since its initial run in the early 1980s, Race d’Ep! is a pivotal work in the history of queer film and radicalism. This presentation revolves around a new translation overseen by writer Bruce Benderson, with the film screened with English subtitles for the first time. The event, with an introductory conversation between filmmaker Lionel Soukaz and Bruce Benderson, will also include a screening of IXE, Soukaz’s 1980 experimental film that responds to the censorship of the “X Law” with a visual and aural barrage of, in Soukaz’s words, “bodies in erection.”

This program forms part of a weekend symposium curated by Artists Space under the title Public Bodies, Private Parts. As an element of Artists Space’s curatorial programming partnership with Whitney Biennial 2012, this weekend of talks, discussions and screenings looks at representations of “hidden” biographies, particularly in relation to notions of “perversion.”


Guy Hocquenghem is often called “the father of queer theory.” A critical theorist, polemicist, novelist, and activist, Hocquenghem is a key figure in the history of gay liberation and in the development of a revolutionary queer politics and culture. Born in 1946, Hocquenghem participated in the 1968 student rebellion in France, joining the Communist Party, before being expelled for homosexuality. A founding member of FHAR (Homosexual Front for Revolutionary Action), Hocquenghem had a significant impact on leftist thinking and queer movements in France. Hocquenghem drew on the work of Michel Foucault and of Gilles Deleuze and Felix Guattari to develop a revolutionary and liberating theory of sexuality. His Homosexual Desire, published in 1972, is frequently cited as the first work of queer theory. The Screwball Asses, an infamous treatise on homosexuality anonymously published in a 1973 issue of the journal Recherches entitled Three Billion Perverts, was published in English for the first time in 2010 by Semiotext(e) attributed to Hocquenghem. Hocquenghem died of AIDS related illness in 1988, at the age of 41.

Lionel Soukaz, born in 1953 in Paris, is an unrestrained originator of the most radical queer cinema. He began making underground short films in Super 8 in 1973, at the age of twenty. Merging pornography and social criticism, these politically and sexually radical films reflect and take influence from the burgeoning queer movements of the post-1968 period. Soukaz organized several gay festivals, of which a 1978 edition was shut down by the French Ministry of Culture. His 1979 film collaboration with Guy Hocquenghem, Race d’Ep!, similarly faced state censorship. He responded with the deliberately scandalous IXE, made as a pure provocation against censorship, flouting all the possible grounds for censorship and featuring heroin fixes, sodomy, zoophilia, pedophilia, blasphemy. Soukaz continues to make uncompromising and provocative films. Recent films and video essays include his 2002 indictments of criminal American imperialism, I Live in a Bush World and Texas Political Chainsaw Massacre, the boldly sexual Our Assholes Are Revolutionary and Porno Industriel, both from 2006, and a portrait film of acclaimed author Abdellah Taia, Portait d’un Ecrivain Marocain à Paris, 2010.

Dirty Looks is a roaming screening series held principally on the last Wednesday of the month.
Curated by Bradford Nordeen, Dirty Looks is designed to trace contemporary queer aesthetics through historical works, presenting quintessential GLBT film and video alongside up-and-coming artists and filmmakers. Filling a gap in the regular programming of queer experimental work in the New York film community, Dirty Looks exhibits a lineage of queer tactics and visual styles for younger artists, casual viewers and seasoned avant-garde filmgoers, alike.
A salon of influences, Dirty Looks is an open platform for inquiry, discussion and debate.
dirtylooksnyc.org 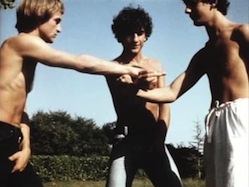