In vintage Kraus (and feminist) style, there is no possible separation of love and sex from politics and philosophy.

Chris Kraus's 1997 debut novel I Love Dick was hailed by Rick Moody as "one of the most important literary events of the past two decades," and has become a cult classic. In her new book, Summer of Hate, Kraus turns her attention to the glaring disparities in expectations and consciousness that have come to define American life. Summer of Hate moves closer to the diseased heart of the USA: dried-out, drugged-out, paranoid New Mexico. Reading it is like watching a car crash happen in slow motion.

Waking up from the chilling high of a dangerous sex game, an art world insider travels to Albuquerque from her home in LA. It's summer, 2005. While Catt's stated goal is to reinvest some windfall real estate gains, she's secretly seeking escape from her niche in the insular cosmopolitan bubble she's strived so hard to attain. In Albuquerque, she meets Paul Garcia, a recently sober ex-con who has just served sixteen months in prison for defrauding Halliburton Industries, his former employer, of $873. Deprived on the most cellular level of knowledge and hope, Paul makes plans, with Catt's help, to attend UCLA. But then he's arrested in Arizona on a 10-year old bench warrant. Caught in the nightmarish Byzantine world of American justice, Catt and Paul's empathic idyll of saving each other's lives seems cursed to dissolve.

For this launch event at Artists Space : Books & Talks, author Chris Kraus will read from Summer of Hate, joined by actor Jim Fletcher and accompanied by musician Jean-Jacques Meunier.

With thanks to Alex Zachary Peter Currie. 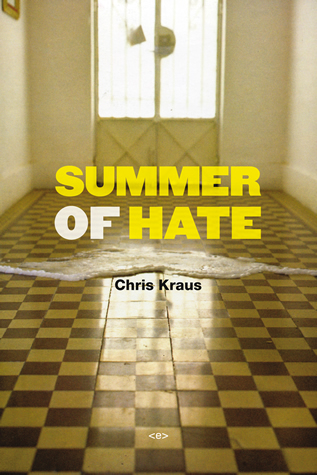