Lynda Morris curated Picasso: Peace and Freedom for Tate Liverpool, the Albertina, Vienna and Louisiana Museum of Modern Art, Denmark, in 2010-11. The exhibition concentrated on the post-war period of Picasso’s career, revealed in the Political Papers in the archives of Museé Picasso, Paris. The papers showed his membership of the French Communist Party from 1944 until his death. As a result he was never allowed into the USA, and when invited to the USSR he chose not to go. He travelled to England in November 1950 for the Sheffield Peace Congress. It was cancelled when many delegates were refused entry to the country. Picasso never returned to England.

Through the tracing of Picasso’s political correspondence to individuals and groups in North America, the Caribbean, Europe and Africa, Morris’ detailed investigations construct a picture of transnational engagement by the artist, and the impact that this had on both his work, and the circumstances of particular struggles. “The Battle for Picasso’s Mind” was a term used by Tom Braden, the CIA agent who put together the International Organizations Division, that funded dozens of cultural front organizations in Europe from 1948 onwards. It highlights the perceived importance of the position taken by Picasso during the Cold War, and the complexities of the critical and theoretical reception of his work in the post-war period.

Lynda Morris’ talk will present key aspects of her ongoing research into Picasso’s politics, following on from keynote lectures given by her for Picasso in Palestine in Ramallah in 2011, and in Gernika for the 75th Anniversary of Guernica in 2012.  Morris is currently research professor at Norwich University of the Arts. 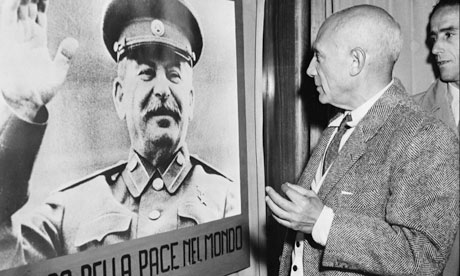 Picasso and a poster of Joseph Stalin, 1949