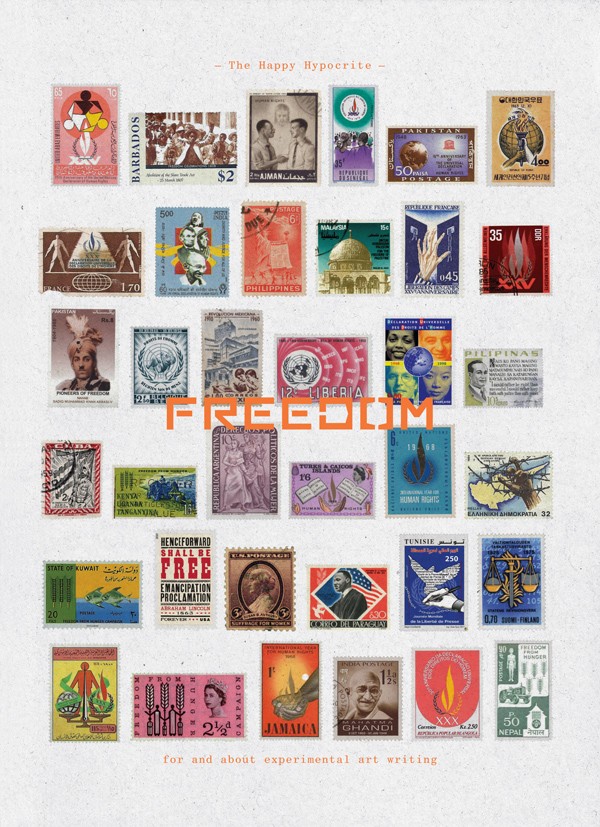 This new issue of The Happy Hypocrite challenges the restraining notions found in art and writing about who and what can and cannot speak. What can and cannot be said or thought. In part a response to Kafka – to that which we don’t know has damaged us – freedom is presented as an important and urgent concept, and a complicated word, in which and beside which hypocrisy also resides. (Hypocrisy can be construed as a freedom). The Happy Hypocrite offers its pages to ingenious fictional, nonfictional, and visual responses to the various meanings of ‘freedom’.

Lynne Tillman is a novelist, short story writer and critic based in New York. Her fifth novel American Genius, A Comedy was published by Soft Skull Press, and said to be, by The Millions, one of the best books of the new millennium. Other novels include Haunted Houses and No Lease on Life, a National Book Critics Circle finalist in Fiction. Her most recent collection of stories, her fourth, is Someday This Will Be Funny. Currently, Tillman writes a bi-monthly column, ‘In These Intemperate Times’, for frieze magazine, and is at work on a new novel, Men and Apparitions. In January 2014, her second essay collection, What Would Lynne Tillman Do? will be published by Red Lemonade Press.