Whatever Happened to Sex in Scandinavia?

Whatever Happened to Sex in Scandinavia? is an anthology edited by Marta Kuzma and Pablo Lafuente that reflects upon the juncture of the political and the erotic in the 1960s and 70s, in particular in relation to the image of Scandinavia as a sexually and politically utopic territory during those decades. Through a close reading of the cultural and socio-political history of Scandinavia through the writings of Wilhelm Reich, Herbert Marcuse, Norman O. Brown, Daniel Guérin, Jacqueline Rose and others, and through an examination of the obscenity bonanza that emerged around Swedish film-maker Vilgot Sjöman’s I Am Curious (Yellow) in 1967, the publication offers a plethora of historical material and an investigation of the political motivations behind naming a cultural form obscene and pornographic.
The publication also includes material that contributes to the understanding of how the underground and cultural activism of the 1960s contributed to the development of the pornography industry in the United States and Scandinavia.

Whatever Happened to Sex in Scandinavia? is introduced by a thesis essay by Marta Kuzma, and includes writings by Susan Sontag, Herbert Marcuse, Wilhelm Reich, Jacqueline Rose, Henry Miller, Elise Ottesen-Jensen and Otto Weininger among others; visual contributions by Stan Brakhage, Marie-Louise Ekman, Dan Graham, Lee Lozano, Claes Oldenburg, Jonas Mekas, Barbara Rubin, Barbara T. Smith, Paul Sharits and Carolee Schneemann among others; and fragments from periodicals such as Evergreen Review, Screw or Suck and underground journals such as Puss, Hætsjj, Aamurusko and Gateavisa, many of which are reproduced for the first time in an English-language context.

The launch of the publication at Artists Space will center on the screening of Barbara Rubin’s double-projection film Christmas on Earth, from 1963. Christmas on Earth is the filmic record of an orgy that took place in a New York apartment. One of the first sexually explicit film works produced by the postwar avant-garde in the US, Christmas on Earth premiered at the Factory under the title Cocks and Cunts, accompanied by a live performance by the Velvet Underground. Rubin, 19 when she shot the film, was described by Andy Warhol as "one of the first people to get multimedia interest going around New York City". The film will be introduced by MM Serra, Executive Director of the Film-Makers’ Cooperative in New York.

This book launch has been generously supported by the Norwegian Consulate General in New York and Fritt Ord. 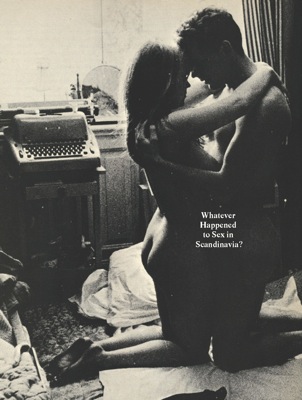